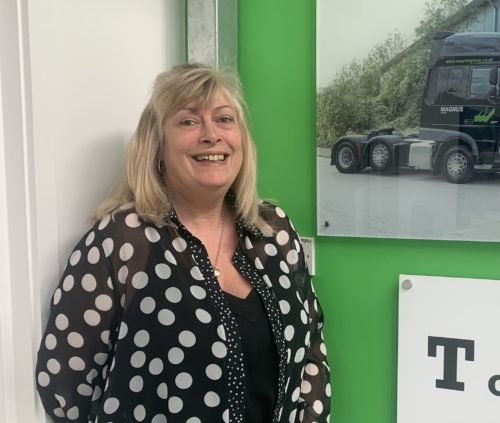 Stephanie Hammond has been part of the Magnus Group team for over 16 years. “I’m not quite sure how that has happened,” laughs Stephanie “At the time I wasn’t even looking for a job!”

How it all started

Stephanie had previously worked with one of the Magnus Directors at a different road haulage company but had been made redundant when they relocated to the north of England.  “I’d worked with John Stringer, who was one of the Directors at Magnus at the time, for years at DFDS. I got a phone call from the Finance Director at Magnus asking if I would be interested in a job that was about to come up at Magnus Group,” explains Stephanie. “I was quite happy where I was working at the time but had enjoyed working in transport, and with John, so thought why not, let’s give it a go. And somehow it is now 16 years later!”.

Those years have seen significant change, and Stephanie is enjoying the new energy and drive which Olly Magnus and the newly appointed management structure has introduced.  Whilst Stephanie has always worked in finance, the role has never stood still. “I love being involved in the whole business, working on my own initiative and making decisions,” explains Stephanie. “No two days are the same dealing with the accounts for freight forwarding, warehousing and haulage”.

How the Finance Department has evolved

Over the years Stephanie has gone from working in a small team of three to working alone, and now in a team of five.  “At one stage, I was working in Great Blakenham, with the Finance Director working in Cumbria and everything was done over the telephone. It was before remote learning and technology were in place so it made it interesting”, laughs Stephanie. She is pleased to now sit in a team of five people and describes them, along with all finance teams, as the “unsung heroes” of business.  “Nothing happens without finance teams working hard in the background, and they are definitely the unsung heroes of the business world,” says Stephanie.

For Magnus Group significant change happened nearly two years ago when Olly Magnus bought into the business to become the new CEO.

“It is a different business now. Every business has to go through changes and Olly has bought a different vision of the future,” reflects Stephanie. “The past couple of years have seen a big turnaround. The company has been shaken up and for the good”.

One of the most significant changes has been the introduction of a divisional management structure, with specialists being brought into the company to head up each area. Stephanie has welcomed this change and feels that it has greatly improved the feeling of teamwork. “We haven’t had a proper management structure before but now each area has a head which means we feel cared for and have someone to go to,” explains Stephanie.

How would you describe your role?

Without hesitation, Stephanie answers with “exciting and rewarding”. What a fantastic response after 16 years!

And when not at work?

You don’t have to talk to Stephanie for long to know she has three great passions in life: Moto GP, her grandchildren and travel.  She now has Mondays off to look after her twin grandsons and sees her other two grandchildren as often as she can. With four grandchildren under 3 years old, she has her hands full when not at work and loves it.

Stephanie loves to travel. She and her husband pack up their motorhome, with the motorbike in the back, and head off.  They have taken several motorbike holidays including around India and the Himalayas. “I remember telling Paul [Magnus, Olly’s Dad] about planning our motorbike holiday through the Himalayas,” remembers Stephanie. “He responded that I was bloody mad and wouldn’t come back alive!”.

As soon as covid restrictions allow, she will be back to travelling around Europe for the Moto GP: perhaps not what you would expect Stephanie to spend her weekends and holiday doing.

Things you don’t know about Stephanie….

First Job – helping out at a disabled respite care holiday home at the age of 14. This included taking people for walks on the prom, helping cook meals in the kitchen and serving in the gift shop.

Never mess with her little sister – when growing up if Stephanie got trouble from other kids, she would send her little sister out to deal with them, who would roll her sleeves up and get stuck in with no hesitation to defend her sister. Stephanie has no doubt it would still happen today if she asked!

Top bucket list wish – to travel the world in the motorhome with her husband.

Supporting the community – in recent weeks, Stephanie is spending part of her weekends volunteering at a local covid vaccine centre.

Magnus Group is based just outside Ipswich, Suffolk, ideally placed to serve the Port of Felixstowe with direct road links to the Midlands, the North and London. If you would like to know more about our warehousing, transport or global forwarding teams call us on +44 (0) 1473836600 or email on commercial@magnusgroup.com.