When Paul Magnus founded his haulage company in 1973 it would have been hard for him to imagine how the company, and industry, would look nearly 50 years on.

You can’t beat a bit of history

Move to 2020 and the differences are many and significant.

The road network has improved and changed beyond recognition with motorways such as M25 (opened 1986) revolutionising road haulage. Safety standards, regulations and law has changed working practices and improved safety within the industry. Manual Handling, Transport of Dangerous Goods, Health and Safety at Work, are just a few of the requirements introduced since the 1980s. In recent years the focus has been on the environment and looking at “green” methods of working. Speed limiters were added to vehicles and time allowed at the wheel without a break has been changed.

Back in the 70s and 80s, driving a haulage truck was very different. Depending on your age, it may either be hard to remember or hard to believe, there were no mobile phones, no satnav, no GPS, or electronic monitoring. When drivers were on the road there was very limited communication. The route would have been through town centres and frequently on narrow roads.

The trucks have developed in the same way as all vehicles have over those decades. They are more comfortable, better ergonomics and high levels of tech to assist with long routes, monitoring and goods control.

Despite all the changes, the principles remain the same: over 90% of goods in England are moved by road, making Haulage the 5th biggest employer in the country. The industry will continue to evolve and change in line with demand, infrastructure and technology. There is no doubt that the changes have been positive for everyone employed in, and using haulage.

Olly Magnus loves looking back at old photos of the company, reminding him of childhood days spent helping his Dad. Olly has decided to keep up one tradition which has been running since the 1970s – the naming of trucks. Paul decided to name his first trucks after his wife and daughter and continued to name trucks after female family members of the Magnus team. With Olly’s focus on team 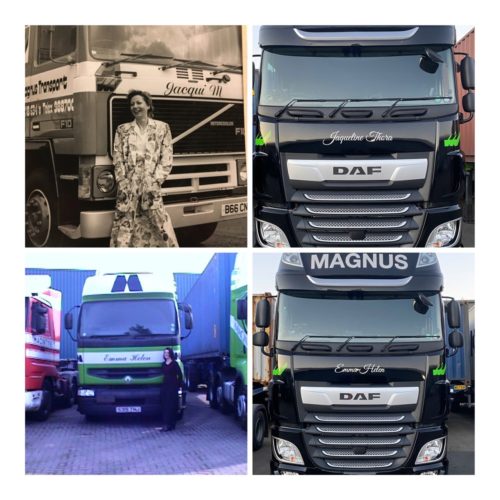 work and creating a family business for the future, he has decided to continue the tradition.

When he introduced new trucks to the fleet, he reinstated his grandmothers and aunties names who had first appeared on trucks in the 1980s. The last additions to the fleet were named after his Mum and sister, as they were back in the 1980s. Other truck names now include Olly’s wife, daughter and niece, as well as family members of the team. It’s a bit of fun and “name spotting” the trucks is fast becoming a local hobby.

Whilst navigating Felixstowe to Reading with no M25 or satnav is something no one misses, some things from the 1970s will remain in Magnus Group for years to come: the focus on family and teamwork.

Magnus Group provides a high standard of customer care with their haulage, warehousing, storage and freight forwarding services.  Magnus Group is based in Great Blakenham, just outside Ipswich, ideally placed to serve the Port of Felixstowe with direct road links to the Midlands, the North and London. If you would like to know more about our warehousing, transport or global forwarding teams call us on +44 (0) 1473836600 or email on Commercial@magnusgroup.com