The shortage of drivers in the UK is hitting the headlines almost every day now. Accompanied with warnings to purchase Christmas gifts early, and predictions of food shortages.

For those in the road haulage industry, this is not a surprise. All haulage companies in Suffolk have been reporting potential risks with low driver numbers.

The Freight Transport Association reports the average age of an HGV driver in the UK is 48.  47% of drivers are over 50 years old. The rate of retirement is greater than the rate of recruitment leaving a shortage of around 90,000 drivers.

A situation made worse by Brexit and the pandemic, yet one which has been predicted for several years within truck haulage. And is not a unique issue to England: even the great trucking nation of America is feeling the squeeze.

The problem with low recruitment is attributed to several factors: rate of pay, working conditions, lifestyle, and the complexity of gaining an HGV licence.

The government has taken action on the complaint that it takes too long to get a test forcing people to seek other work instead. In an attempt to make it a quicker and slicker process to get an HGV licence the government has introduced some changes.

By removing the need for car drivers to take another test before towing a caravan (demand of which has increased considerably during the pandemic) 30,000 test slots a year have been opened up.

The current HGV test, consisting of two parts, held three weeks apart, has been made shorter by removing certain elements. One test will be needed whether to drive a rigid or articulated lorry, freeing a further 20,000 tests a year.

“From Inverness to St Ives, HGV drivers are helping to keep the country running, and have been throughout the pandemic. The shortage of drivers is a global problem, but we’ve been taking action here in the UK to help industry leaders attract drivers and build a more resilient sector.

We’ve already delivered 50% more tests than were available before the pandemic, but today’s additional measures will deliver up to 50,000 more a year, helping more and more people to kickstart their career as a well-paid HGV driver”.

The government is adamant that safety standards and driving quality will not be impacted. The changes are in response to public consultation and are now possible due to no longer having to follow EU regulations. 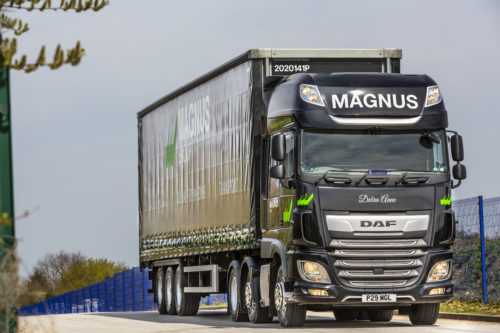 Magnus Group Ltd is being proactive to maintain its driver numbers and plan for the future. Emma Lightfoot, Head of Personnel and Development: “Whilst we have seen many changes in the industry since Brexit, the introduction of IR35 and the impact of coronavirus, we have been lucky in that we have retained the majority of our drivers. To help people retrain, we have also taken on a couple of apprentice drivers whose training we will pay for and have also committed to covering training costs for our Class 2 drivers who wish to gain Class 1 status”.

Like many industries, Magnus Group is also seeing working hours changing.  For this reason, we have a few vacancies for permanent positions, either part or full-time, and would be interested to hear from anyone Class 2 or Class 1 qualified by submitting a CV or email via teammagnus@magnusgroup.co.uk

Magnus Group, a haulage, warehousing and freight forwarding logistics company, is based just outside Ipswich, Suffolk, ideally placed to serve the Port of Felixstowe with direct road links to the Midlands, the North, and London.  If you would like to know more about our warehousing, transport or global forwarding teams call us on +44 (0) 1473836600 or email on commercial@magnusgroup.com. We advertise our driver jobs on our company website: if you would like to join our team, follow our LinkedIn company page and check out our website.