For those who work with Magnus, or have read our website, you will be aware of the history of the company.

For those new to Magnus, Olly became CEO in 2019. He knew he had taken on a challenge and had a two-year plan to start to turn the company around. In less than a year, he had to add “worldwide pandemic” to that list of challenges.

Despite everything that has been thrown into the mix in the past eighteen months, the business is going well. After a rigorous recruitment drive to bring the best into the business the company is in a strong position. The long-standing team now have the support and structure they need, and the future is looking bright: some would say bright green! The warehouse is bursting at the seams and has a fantastic team to run it. Transport and Freight Forwarding are ticking along. Everyone at Magnus would agree there is a long way to go but they have made a flying start in the face of adversity. Being located in Suffolk, close to Felixstowe Port, is ideal for a freight forwarding and haulage company. The 225 sq. ft of state-of-the-art warehousing adds to the service Magnus Group offers. The culture of everyone in the team matters, and working together to achieve more, is paying off.

Perhaps a challenge which Olly didn’t have on his list, along with the pandemic, was his mental wellbeing. The challenge of how best to deal with the emotional turmoil that comes, not only with running your own business but with taking on the family business.

His story is one which entrepreneurs and business owners can relate to and recognise, but isn’t a story which most are prepared to share. Via LinkedIn, Olly shares his sleepless nights and roller-coaster emotions. He frequently quotes Charlie Mackesy “The Boy, The Mole, The Fox and The Horse” with its messages of empathy and self-care. He shares that he suffers from “imposter syndrome” and lacks self-confidence. He tells how he has taken an emotional battering at times in life which has left him damaged and vulnerable.

Sharing such vulnerabilities on LinkedIn, a business social networking site, has received mixed reactions. He has received private messages telling him to “man up” and that he is “over-sharing” and will damage his business. The occasional sarcastic response appears on his wall but overall, the response has been supportive. Men and women, of all ages, have applauded Olly for sharing what many are feeling. His open and honest approach, and not being scared to wear his heart on his sleeve is refreshing in the business world and is being well received.

He was interviewed by Kevin Rogers (https://www.linkedin.com/video/live/urn:li:ugcPost:6717810455022198785/) and described himself as just “Olly from Ipswich”. He couldn’t understand why honesty was receiving such a response: surely everyone should be honest about everything?  He shared his past business experiences and how he is always genuine.

His podcast with Peter Rushmer (https://www.podbean.com/ea/pb-z98er-f52cbe) included him talking about his experiences of being in a coma, learning to walk again and his heart stopping multiple times due to stress. He shares his self-doubt and years of not believing that he was good enough.

He posts about missing his mates, the pub, the gym and normal life, and acknowledges how that is impacting on his emotional wellbeing and stability.

He continually refers to #teammagnus, the importance of surrounding yourself with good people, and about treating everyone well. A mantra he lives by, installed in him by his Mum, is to treat everyone well on the way up, as you don’t know who you will meet again on the way down.

Olly puts out there what everyone else is thinking, going through and feeling. On a business forum where the norm is to blag it, keep smiling and survive with bravado.  It is unusual, maybe unique, for a CEO to share such vulnerabilities. Especially when he doesn’t share them as being in the past and dealt with: this is all now.

One Friday morning in January, at 6 am, after another sleepless night, with a head full of self-doubt and worry about the future, Olly wrote another post on LinkedIn. This time it went viral. Over 1.2 million views, 24k views and 1,775 comments. Olly is overwhelmed by the response and proud that others are now following suit with their own posts in the same style.

With hashtags such as #backyourself, it supports Olly’s ethos – be real, be loyal, and believe in yourself even when your black dog may be telling you otherwise. 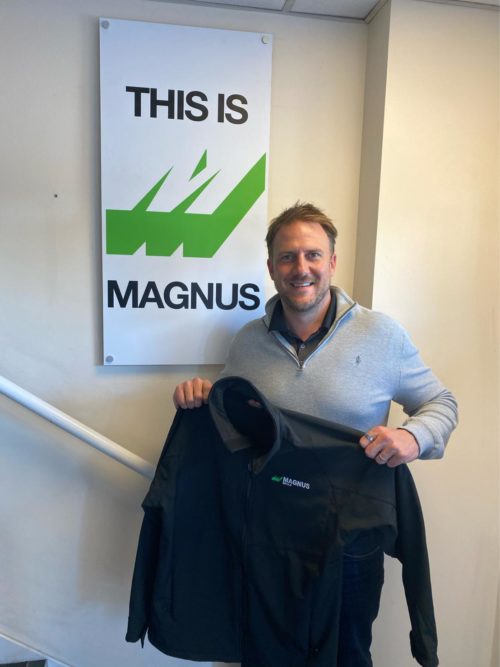 This Man is me – Olly Magnus

This Man is just the same as you