The History of the Magnus Group 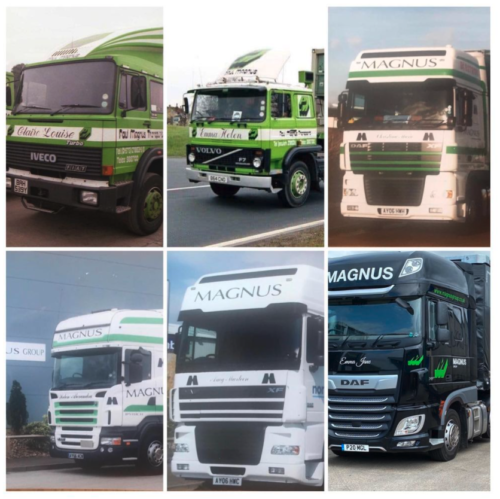 Back in 1973 when Paul Magnus set up “Paul Magnus Transport” little did he know that nearly 50 years later, the company would still be going strong under the leadership of his son Olly. This is no ordinary family business story: Olly didn’t automatically inherit a thriving family business. He has over 20 years’ experience in the industry, running his own freight forwarding company, and risking it all to bring Magnus Group back under family control.

Paul Magnus Transport started as a transport company with a handful of trailers. He created a strong identity with a logo based on his initials, and bright green highlights on the trailers. The company expanded over the years offering a variety of services including haulage, warehousing and distribution. Paul worked long hours to make the company a success, and it was a fundamental part of his children, Olly and Emma’s, upbringing.

There is no doubt that Olly has earnt his seat as CEO. Despite growing up in, and around Magnus Transport, his first “proper” job in the industry was not for his father’s company, but a global shipping line learning the import/export business. He then became his father’s warehouse and transport co-ordinator, learning the details of the business from the ground up. With this invaluable experience and teaching, Olly then co-founded his own freight forwarding business which he successfully managed for 16 years.

In the mid-1990s Paul had decided to sell 40% of the company and bring in a partner, allowing him to seek out new business opportunities. Whilst Paul remained the name and face of The Magnus Group, it was no longer under sole family control. The recognisable branding disappeared and to a certain extent, the company stagnated. Following his death in 2018, Olly decided the time was right to return to his roots. He sold his share in his own company and bought back the 40%, bringing the company back into the control of the family.

Since 1973 family and people have been at the heart of operations at Magnus. Olly is keen to bring back, and embed, the focus on having a strong team, who work hard, and play hard. He wants it to be a fun place to work. He has made sure he is surrounded by a team of the best in the business. Although only at the helm for 18 months, Olly has made significant changes. A strong recruitment campaign has been completed, expansion of the warehousing facility to provide a state of the art, modern facility and a rebrand to put Magnus back on the map. The fleet has been increased to 60 and a dedicated freight forwarding department has been established.

Modernising a family business whilst staying true to the ethos and approach is not an easy task, yet Olly seems to have struck the balance beautifully. The logo and branding are based on his Dad’s original colour scheme and logo producing a strong and memorable vehicle livery. The warehousing is one of the most modern in the region with full height narrow aisle racking and wire-guided man-up operated machinery and computerised stock control. The recruitment plan has enticed the best in the industry to work alongside the loyal team who some of whom have been with Magnus since the late 1990s.

To promote the brand and company, Olly initially turned to LinkedIn. Although a member for over ten years, Olly only starting posting when he became CEO in July 2019. He has a fantastic response to his posts, which can be described as honest, with a “say it how it is” approach. Recently interviewed on a LinkedIn live by Kevin Rogers, of Wilson Browne Solicitors and a member of the Northants Logistic Forum, Olly has firmly established himself as the face of The Magnus Group. Sharing often an emotional account of his journey over the past twelve months on LI has afforded him a following of nearly 5000 and respect not only in his own sector but in the wider business community. Watch Olly & Kevin talking about Magnus Group.

Olly believes in surrounding himself with good people and listening to the experts. Constantly learning and prepared to flex, The Magnus Group is a fantastic example of a modernised family organisation. With a strong ethos of family, treating people well and hunger to succeed, the future is looking bright.

We pride ourselves on being a family business with a team of industry experts heading up each division. We aim to provide transparent, excellent customer service, working in partnership with our clients. Our long-standing relationships, several over 16 years, reflects our ability to support our clients. We would love to invite you to have a look around our site, based at Great Blakenham, just outside Ipswich, and discuss how we can work together. If you would like to learn more or have a chat, please call us on +44 (0) 1473836600 or email commercial@magnusgroup.com