Magnus Group Ltd, a road haulage, warehousing and freight forwarding business, is based in Great Blakenham and Felixstowe. Olly bought into the family business in 2019 following the death of his father and founder, Paul Magnus. Over the past two years, Olly has been determined to bring new life and energy into the company.

When asked how Magnus has been so successful over the past two years, despite the challenges of a global pandemic and Brexit, Olly is clear on the answer – teamwork.

Olly attributes the growth of Magnus to the team. “I believe in everyone having a voice and being heard. Every single person in the Magnus team is listened to and adds value. We have outstanding talent in our senior team and I trust them completely,” says Olly.

Road haulage traditionally is not known for its high level of staff welfare. One of the issues being blamed for the current lack of drivers in the industry is the working conditions and poor staff management. Magnus is determined to show that they are different. Emma Lightfoot joined the team a year ago as Head of People and Culture. She has since introduced a staff newsletter, started a monthly H&S Group, updated the Staff Handbook, and improved Induction. A Well-Being service has been introduced not only for staff members but for their immediate family too to provide emotional and well-being support.

“Over the next twelve months we will be introducing formal six monthly 1-2-1 meetings for all office-based staff, and look at improving engagement through a mentoring and coaching scheme,” explains Emma. “I want to look at perhaps setting up a running club, and more outdoor physical activities during breaks, and bring the teams together more.”

“Olly has introduced some big changes over the past twelve months, and we need to make sure we bring people together and have the support structures in place to create a great culture in which to work,” says Emma. “The freight, logistics and warehousing industry doesn’t always have a great reputation for staff welfare. We want to lead the change not only for haulage companies in Suffolk but in the country and show people that it is a great career to follow.”

Partying – in the car park!

Olly, known for his fun approach to life and work, gave a car park party last year to celebrate the 35th employment anniversary of a team member, and acknowledge the work everyone had been doing during the first covid lockdown. The party was such a success it is now going to be an annual event.

This year the summer car park party, held on Friday 30 July, included pizza, a band, casino tables,  and fireworks. It brought the whole team together to celebrate the past year.  The focus of the party was the newly built decking and bar area.

“I wanted to create a space where staff would relax and recharge during the day, but that we could use for events and fun,” explains Olly. “The Paul Magnus Watering Hole” was created: a decking area with seating and a bar, giving views over the pond, surrounded by colourful planting. It provides a relaxed rest area for the team and is used for meetings, lunch breaks and after work socials. 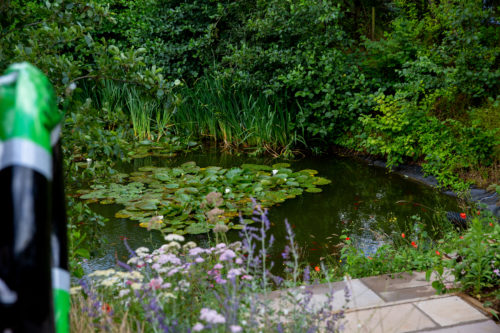 Partnering up with a local non-alcohol brewery, Big Drop Brewing Company, the bar is stocked with a range of non-alcohol craft beers as well as alcohol options. “James and Rob are a real Suffolk success story with Big Drop, and partnering with them for staff events is a no-brainer. We all like to have a beer on a Friday night and catch up after the week and being able to do that with a non-alcohol craft beer is fantastic”, says Olly.

“Big Drop is all about brewing beer so good, you won’t miss the alcohol. When Olly and the team told us about the new staff bar at their HQ we were on hand to deliver the award-winning goods” says James Kindred, Co-founder of Suffolk-based Big Drop Brewing Company.

Paul Cook, Manager of ITFC, was invited to officially open the new decking area as part of the summer party event. 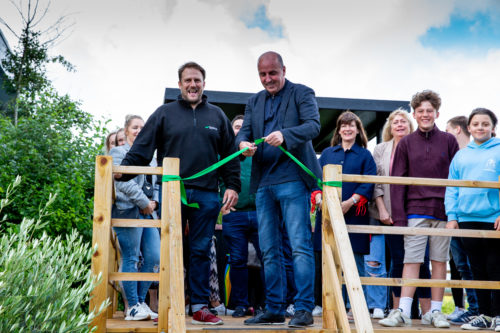 Olly Magnus has had a season ticket at Portman Road for as long as he can remember. “Having the opportunity to sponsor the U16 team is fantastic. Supporting the Academy and the young talent coming up is a brilliant way to be involved in the club,” explains Olly.

Getting involved in the local community by sponsoring local clubs, such as the Suffolk U14 Cricket Team, the Trimley U18 Football team and ITFC U-16s, is an important part of the culture at Magnus. “We have been a family business in Ipswich for nearly 50 years. Sponsoring local teams is not only a great way of getting our name known, but a great way to give back and support the local community,” says Olly. “Being involved with ITFC is a great honour. I love seeing the Magnus name on the U16 shirts.”