Last year Patsi celebrated 35 years at Magnus Group: not bad for someone who after her first day swore she wouldn’t return for a second!  Seven locations, three departments and two generations of the Magnus Family later, Patsi is still loving it.

Patsi remembers her first day as a Junior Shorthand Typist for the Directors. “I remember it being so busy, and everyone was using words and terms that I had no idea what they meant – or how to write them in shorthand,” laughs Patsi. “I went home and cried, and told my Mum that I didn’t want to go back”.

Have you seen much change since 1985?

“We have been at Great Blakenham for nearly 20 years now,” explains Patsi, “but my early years with Magnus saw a lot of moving around as the company grew.” Patsi has worked in seven locations: Duke Street, Bishops Hill, Cliff Quay (twice!), Felixstowe, Wherstead Road and Great Blakenham.

“It felt a bit stagnant for a while but now there are new ideas every day, and new people joining the team,” says Patsi. “Change is happening and it feels great for the company and the team.”

After a few years of supporting the Directors, Patsi moved into Transport, then Warehousing, before moving into Accounts last year. “I’ve enjoyed working in all the departments,” explains Patsi, “but I am very happy in Accounts. I like being able to plan my work. You need to be reactive in Transport and Warehousing as you never know what is going to happen. It’s a bit more controlled and calmer in Accounts.” 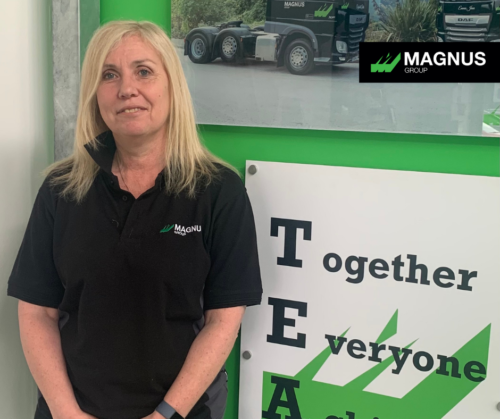 What has kept you at Magnus?

Patsi talks fondly about the support and teamwork which makes Magnus a family business. Her niece works at Magnus, and they are just one of the family groups who work at Magnus. “There are a few family groups working here,” says Patsi, “which just goes to show what a great place it is to work. Although no idea where the last 35 years have gone!”

How has life been at Magnus since Olly took over in 2019?

“I still remember answering the telephone to a little boy asking if he could speak to his Dad,” laughs Patsi. “I’ve known Olly since he was 12. Since he took over the company, we have never been so busy with extra warehouse space, and Olly has big plans”.

Last year to celebrate Patsi’s 35 years with the company, and Olly’s 1st year as CEO, the company held a “carpark party”. “We had a brilliant time with music, food and a roulette table out in the car park to celebrate “covid style”. The party was such a success I think it is going to become a new tradition each summer.”

Things you don’t know about Patsi….

Patsi’s first job was a paper round which progressed to working in a newsagent. But not just any newsagent: a newsagent that was owned by Phillip Robson and his brother Bobby. The papershop in Stowmarket would often have the Ipswich Town team turn up to sign autographs for local fans.

Patsi’s first album can’t quite be remembered but she is confident it was something by Abba.

Patsi’s bucket list includes a water bungalow in the Maldives with a suitcase full of books.

Patsi’s full name is Patricia which means she has been called various versions over the years. It is only Olly who calls her Cornish though after deciding to call her Pastie instead of Patsi!

Magnus Group is based just outside Ipswich, Suffolk, ideally placed to serve the Port of Felixstowe with direct road links to the Midlands, the North and London. If you would like to know more about our warehousing, transport or global forwarding teams call us on +44 (0) 1473836600 or email on commercial@magnusgroup.com.