Josh, Account and Administration Manager, at Magnus Group Ltd, hasn’t always been lucky with his timing of key life events.

He finished college just as redundancies hit a high at the end of the “Great Recession”: having a BTech in Electrical Engineering didn’t give him the opportunities it would have at a different time. He saw an advert for an engineering company and after a robust interview process, Josh successfully secured an apprenticeship position. This meant a further six years of study to gain an HNC in Mechanical Engineering whilst he was working.  In 2019 the company decided to move all its factories to Europe leaving Josh redundant.

Josh decided to take a few months off over Christmas and then go travelling. He had no idea that a worldwide pandemic was about to hit. His flight out of New York was the day before the country locked down and all international flights stopped. The good news was that he got home, but he returned to no work and a full lock-down limiting his options.

You may recall that for VE Day celebrations in the UK we were encouraged to have socially distanced street picnics. It was at one such “front garden picnic” that Josh’s Uncle Rick suggested that Josh did some temping for Magnus. Josh joined thinking it would be for a two-week temporary contract – 18 months later, he is planning his career path with his line manager and has every intention of his long-term future being with Magnus Group.  Ironically Rick started in the same way with the company – 22 years ago! [You can read about Rick’s journey with Magnus here]

“I love the mix my role gives me,” explains Josh. “I’m involved in the warehouse, dealing with queries and checking out the status of different contracts, as well as being at my desk. It’s a good balance.”  Josh now manages a team of five and is involved mainly with clients who use Magnus Group Ltd for warehousing and road haulage, whether full-load or pallet distribution. 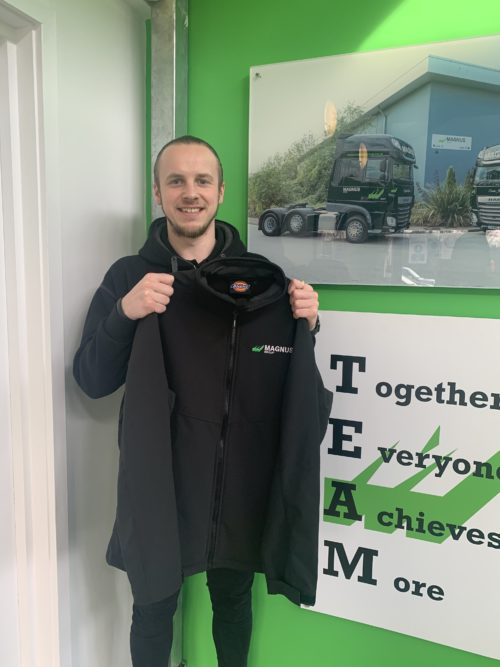 You may think it’s quite a change from working in tech in mechanical and electrical engineering to account management in the logistics industry but Josh would argue that many elements are the same and he is loving it. “The planning, customer interface and attention to detail have always been part of my roles, it’s just a different subject”, explains Josh, illustrating how the logistics and warehousing sector can benefit from transferable skills from other sectors.

“Right from the start with Magnus Group, I was made to feel welcome by everyone. It is genuinely a family business and has a real homely feel. The culture of work hard and play hard is great, and I look forward to coming to work and seeing people. I see my future here with Magnus. “

When Josh is not at work, sport, particularly football, is a key interest: he may have described it as the “one love in his life” before realising that phrase could get him into trouble at home!  One of his first jobs was as a football coach for an afterschool and holiday club. His bucket list includes going to Brazil and Argentina, not for the cultural and natural wonders, but the football. When not watching or playing football, Josh is part of a Darts League.

And no article about Josh is complete without a mention of his tattoos. At the age of 17, he agreed to let a mate who had just purchased a tattoo gun practice on him. Even Josh is not sure why he thought it was a good idea to get his own name tattooed on his wrist but should he ever suffer from amnesia, he just needs to glance down to be reminded that yes, indeed, he is called Josh. On the other wrist, he claims his tattoo is “Carpe Diem” although his brother tells him it looks like “Carte D’Or”.  Have a look if you meet Josh and decide whether you think he is seizing the day, or thinking about what flavour ice cream to have!

Magnus Group, a haulage, warehousing and freight forwarding logistics company, is based just outside Ipswich, Suffolk, ideally placed to serve the Port of Felixstowe with direct road links to the Midlands, the North and London.  If you would like to know more about our warehousing, transport or global forwarding teams call us on +44 (0) 1473836600 or email on commercial@magnusgroup.com.

We advertise our driver jobs and warehousing jobs in Ipswich and Felixstowe on our company website: if you would like to join our team, follow our LinkedIn company page and check out our website.