When Josh Everett took a career break to go travelling, little did he know that the world was about to turn upside down. COVID took hold as he came to the end of his American adventure – and the UK went into lockdown the day he flew home.

It was April 2020, and there couldn’t have been a worse time to try and find a new job.

Josh, 27, was trained as an electrician and had a BTEC and HNC in mechanical engineering, but any hope of landing a new role seemed far-fetched.

His uncle, Rick Everett, who works at Magnus Group, suggested the company was looking for temporary support in the office, and Josh might like to give it a try.

Two years and two promotions later, Josh is the Account and Administration Manager at Magnus HQ, a customer-facing role running our key accounts. He is the vital link between the client and the warehouse operations, solving problems and making sure everything runs smoothly. 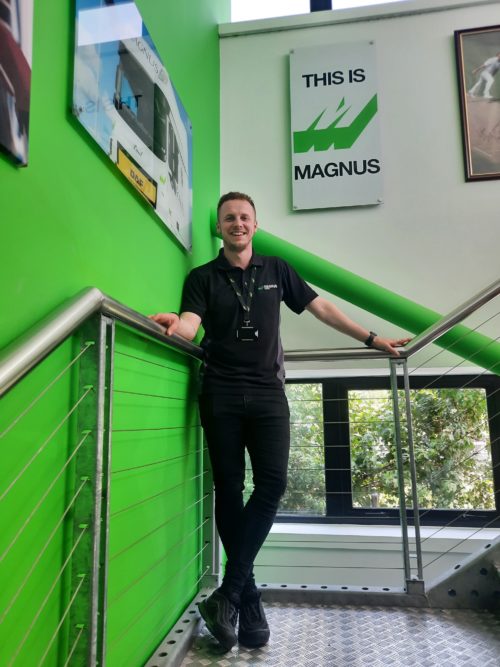 Josh Everett: up for a national award

Young Employee of the Year Award

Such has been Josh’s development at Magnus Group that the company put him forward for Young Employee of the Year in the UK Warehousing Association annual awards.

His line manager, Dave Flewitt, the General Manager of Warehouse Operations, said: “Soon after joining the company, Josh was made an admin supervisor. I joined Magnus Group last year, and Josh impressed me, so we decided to promote him again to Account and Administration Manager.

“His transformation from mechanical engineer to managing our warehouse accounts has been exceptional, and being shortlisted for the award is well deserved.”

Josh was brought up and still lives in Hadleigh. He went to school locally and then trained as an electrician at Suffolk New College. His first job was an apprenticeship role at a Sudbury engineering firm, where he got his BTECT HNC in mechanical engineering.

However, the business switched operations to Romania, and Josh was made redundant, hence his decision to spend some time in the US.

“The timing couldn’t have been worse,” Josh explained. “The day I flew home was when everything went into lockdown. I had no job and little hope of finding one.

“But then the offer to do some temporary work at Magnus Group came along – and I’ve been here ever since!”

Josh says working at Magnus Group is a great experience.

“It’s a family company – not just because family people run it but also because everyone here is part of a team. We are the Magnus Group family.

“The company has built a really good team, and everyone pulls together for the same goals.

“It’s a real honour to be shortlisted for the United Kingdom Warehousing Association Award, and I look forward to attending the awards ceremony with representatives of the business.”

Congratulations, Josh – and good luck at the awards!

Magnus Group is a haulage, warehousing and freight forwarding logistics company based just outside Ipswich with additional warehousing at the Port of Felixstowe.

If you would like to know more about the business, please call +44 1473 836600 or email commercial@magnusgroup.co.uk